What we love, where we love it, and how you can love it too! Here’s our Mondo list of local concert recommendations for this weekend.

Peru’s Los Saicos are long disbanded, but lead vocalist Papi Saicos is reviving what considerably started garage rock from scratch. The Sonics to Lux Interior unearthed Los Saicos for inspiration; the Saicos split personality of harmonies and howling vocals, like the screeching yelp of an abuelita across the hall in the vein of surf rock band the Trashmen—as if she had jumped on stage asking if every member has had lunch, except on their terms they sing about blowing up a train station. It’s the rattling alarm clock sound instilling the idea in the early ‘60s that they are indeed the “psycho” they changed their name to be amid the controversy of being deemed sadists, due to their former name that is now used by the cover band backing Papi Saico for this show. It’s an even looser cross-hatching of garage punk with South American traditional songs, with Mala Vista’s Dead Boys ‘77 punk opening alongside Donde Estamos, the real stage setting for the dance your abuelita would theoretically be at. And at the end of the night, in the grand scheme of things, and other idioms galore, everyone will definitely be dancing. 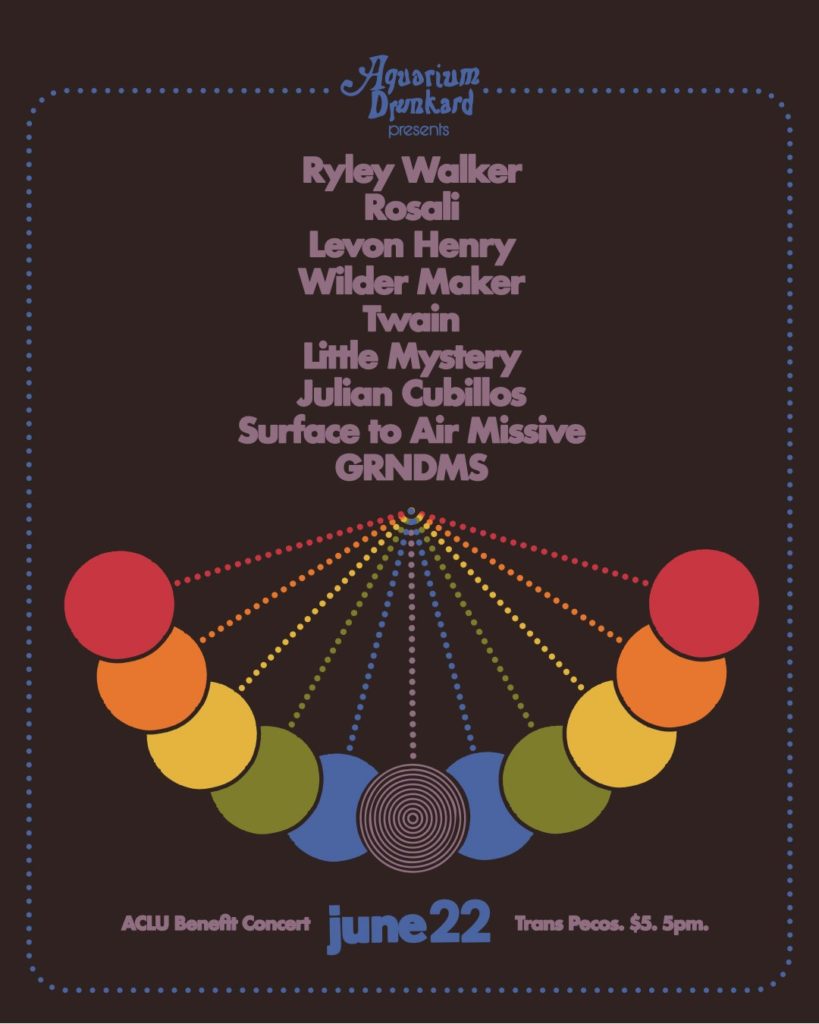 Folk in the afternoon, folk at night. Trans-Pecos soothes down for the sake of constitutional rights, exploring Aquarium Drunkard’s curated show in benefit of ACLU. An all-day event of folk with avant-garde frequencies–Ryley Walker headlining with his acoustics and dissonant percussion are the cradle that’ll soothe you. The rest of the show is a continuum of that same musical thought, with Levon Henry and Twain’s multi-instrumental fusion dawning Pecos’ glass-stain windows among ’60s psychedelic rock influenced confections. Drunkard know how to put together a show.

Philly soul is what grasped Alice Cohen at a young age and her New Wave history as part of the ‘80s band the Vels is what paved her trail towards a dream pop landscape of synthesized in a stratus cloud sunset of disco elements. The intimate corners of The Glove fit this show of Space Lady proportions–the wind chime trinkets and baroque rock of The Cradle, Lily Konigsberg of art rock band Palberta sounding a lot like Julee Cruise will be debuting a full band for her solo set, and Agua Vivaldi’s harmonious and  celestial bilingual pop join to form the elements of an ethereal night.

After the death of her son in 1992, Marjorie Elliot began to commemorate him through jazz shows—first beginning at Moris-Jumel Mansion, and now 3 floors up in her apartment turned studio. Every Sunday since, Marjorie Elliot has opened her home to anyone who wished to hear, her simple smile gracing you as she crosses your path to play alongside the ensemble of young and old jazz musicians; the simple gesture of inviting community through art as Sunny D and granola bars is being passed around by her neighbors, and this genial and warm familiarity as if you lived there too. She has never not missed a day, or a beat. It’s a Sunday sermon of bop and gospel proportions that carry on the legacy of Duke Ellington, of the Harlem Renaissance not long forgotten, at the edge of the neighborhood in the most languid and poetic 3 hours you may experience.

Check RECS every week for our next edition of New York local events!

All Mondo.NYC 2020 events subject to change without notice.